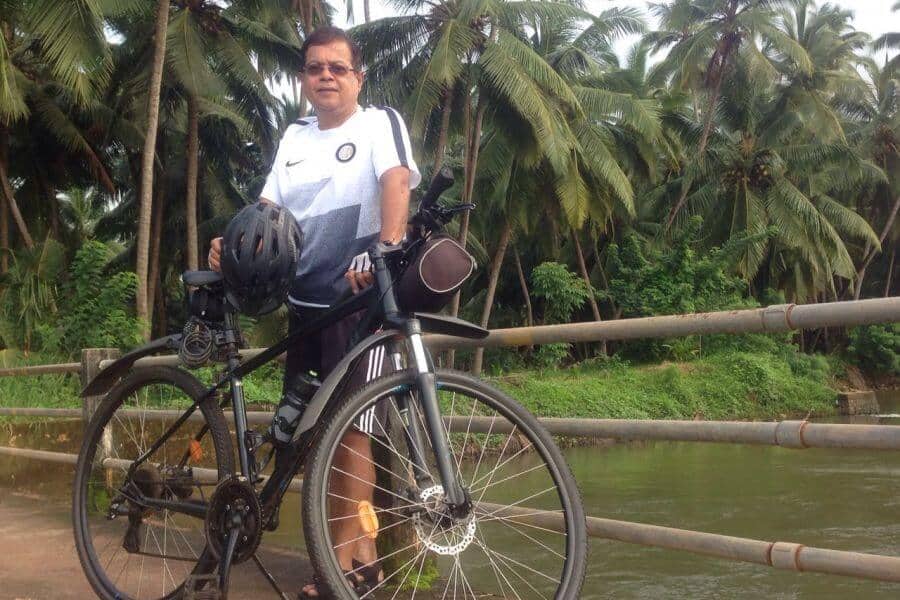 “You can’t be sad while riding a bicycle”

As a regular walker, I was used to walking miles as a part of fitness regimen. It was around this time that I was introduced to the world of Bicyclists. Initially I was curious and also intrigued by the idea of cycling especially when I was in my mid-forties. Not wanting to be left behind, I decided to give this a try. Now I can vouch that this has been one the best decisions I have taken.

The idea, initially, was of course to burn a few extra calories and for a more fitter me. Cycling proved to be much better than walking. Bicycling helps lose more calories and doesn’t cause pressure on the knees. In fact it helps energize the body. Having said that, what is more important is that cycling brings me a lot of happiness.

Bicycling also has one more positive effect – It helps de-stress. Over the years I have become passionate about my bicycling. Every time I get on cycle, I feel a sense of renewed energy. Riding down the winding roads, watching the villages go by, the gushing streams, the greenery around, breathing in the fresh air makes me feel connected and one with nature. This adds to my Happiness Quotient.

On one occasion, I was amazed to see a flock of parrots feeding on a field of Lady’s finger. Such was the beauty of the sight that I realized later I would never have got to see such a lovely sight had I not pursued this passion of bicycling. While these are some quiet moments, times with my friends adds to the adventurous spirit. Speed is never the question – one can stop, savour the beauty of nature and move at your own pace.

It was on one our motorcycling sojourns to Ladakh that I met this group of enterprising Doctor Cyclists who are returning from a bicycling expedition to Ladakh. Listening to their enthusiasm and experience while cycling the rough terrain added to my eagerness to purse my passion further.

It is my dream to cycle to the Himalayas, riding through the mountainous paths reaching places that one cannot on foot. “Difficult roads often lead to beautiful destinations”